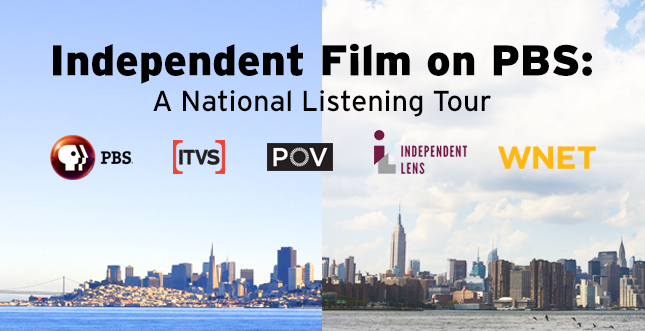 In keeping with its commitment to being the “home to indies,” PBS programming leadership will travel throughout the country over the next few months to meet with independent filmmakers, PBS independent film series producers, PBS station programmers, and other public media and community partners. Listening Tour co-hosts will include ITVS, POV, Independent Lens, and WNET, among others.

At each stop, event participants will voice their priorities, concerns, and ideas on how all the stakeholders can work together to strengthen audience and community engagement with social issues storytelling. San Francisco will be the first stop on the tour on Saturday, January 17. The event will be hosted by PBS, WNET, ITVS, Independent Lens, and POV, with co-sponsors:

The Listening Tour hosts will announce additional stops in New York and elsewhere as they are confirmed. ITVS looks forward to building a roadmap with our partners for the long-term success of independent film on PBS.

If you have any questions, please contact us at  ListeningTour@itvs.org