Conscience and the Constitution

In 1944, 85 Japanese American prisoners in an American internment camp were prosecuted as criminals when they refused the draft. 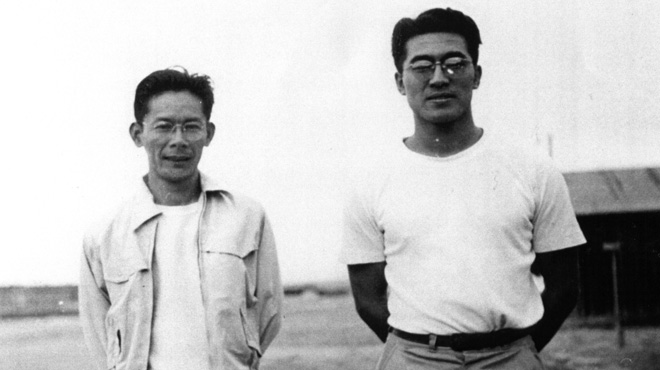 Frank Abe, a third-generation Japanese American whose father was interned at Heart Mountain, was an award-winning reporter for the CBS Radio affiliate in Seattle for 14 years. His film Conscience and the Constitution, details the largest organized resistance to the World War II incarceration of Japanese Americans.

With a B.A. in theater directing from the University of California at Santa Cruz and training from the American Conservatory Theater in San Francisco, Abe (with Frank Chin) was a founding member of the Asian American Theater Workshop (now Theater Company) in San Francisco. He was also featured as an internment camp leader in John Korty’s 1976 NBC-TV movie Farewell to Manzanar.

Other ITVS Films
In Search of No-No Boy

Long before the civil rights marches of the 1960s, another group of Americans fought for their basic rights as U.S. citizens. In 1944, 63 young men stood trial for resisting the draft at the concentration camp at Heart Mountain, Wyoming. Seven leaders were accused of conspiring to encourage them. The dissidents served two years in prison, and for the next 50 were written out of the popular history of Japanese America.

In December of 1941, World War II was already raging in Europe, but the Japanese attack on the naval base at Pearl Harbor still stunned the American public and drew the nation into the war. The attack cast unfounded suspicion on all persons of Japanese ancestry in the U.S., and came on top of a century of anti-Asian prejudice and discriminatory legislation. Despite being warned there was no military necessity, and having no evidence of planned sabotage or imminent invasion, President Franklin D. Roosevelt ordered the mass removal of 110,000 persons of Japanese ancestry from the West Coast to 10 American concentration camps in seven states: California, Wyoming, Idaho, Utah, Arizona, Colorado and Arkansas. They held both the Issei, first-generation immigrants who were barred from U.S. citizenship, and their children, the Nisei, born in this country as U. S. citizens. Two-thirds of those incarcerated were U.S. citizens. Those persons of Japanese ancestry in Hawaii were not removed.

Over time the American public has come to understand that the forced expulsion and incarceration was wrong, and in 1988, the government held itself accountable, apologized and awarded token redress to recognize the Constitutional violations. Conscience and the Constitution takes the camp story a step further, by examining two different Japanese American responses to the injustice: compliance and resistance.