Patsy Mink: Ahead of the Majority

A look at the life of Patsy Mink, the first Asian American woman and woman of color in the United States Congress. 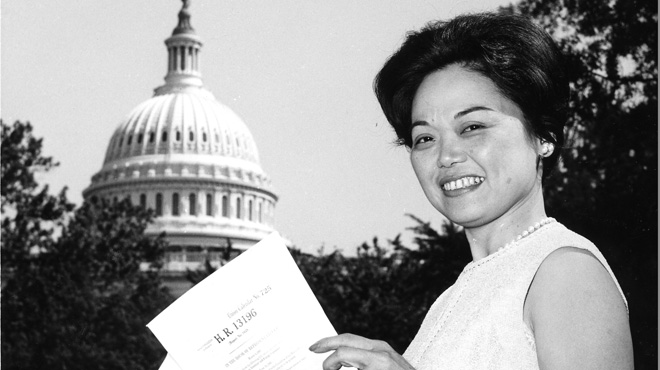 Kimberlee Bassford is an independent documentary filmmaker specializing in social issue, cultural and women’s stories. Her most recent film, Patsy Mink: Ahead of the Majority (2008), explores the life of the late U.S. Representative Patsy Mink, the first woman of color in Congress and co-author of the landmark Title IX gender equity legislation. The… Show more film won the Audience Award at the Hawaii International Film Festival and San Francisco International Asian American Film Festival, Grand Jury Prize at the DisOrient Asian American Film Festival, and Spirit of Humanity Award at the San Joaquin International Film Festival, among other honors. It aired nationally on PBS and has educational distribution through Women Make Movies. Bassford was a producer on two national PBS documentary series: Unnatural Causes: Is Inequality Making Us Sick? (2008), which investigates America’s health disparities; and The Meaning of Food (2005), which explores the social significance of food. She made her directorial debut with Cheerleader (2003), a short documentary that follows a squad of young, bright-eyed California cheerleaders on its quest for the national cheerleading championships. The film aired on HBO Family and won the Student Academy Award in Documentary and CINE Golden Eagle. It screened in film festivals around the world, including the Cannes Film Festival’s Kodak Emerging Filmmaker Showcase. Bassford holds a BA in psychology from Harvard University and a Masters in Journalism from the University of California, Berkeley. She owns Making Waves Films LLC, a documentary production company in Honolulu. Show less

In 1965, Patsy Mink became the first Asian American woman and woman of color in the United States Congress. Patsy Mink: Ahead of the Majority looks at Mink's remarkable political journey, while often lonely and tumultuous, as she fought for the most disenfranchised and forgotten in society.