The vivid voices of "lifer" inmates, ranchers, and politicians reveal the untold story of the impact of America's prison-building boom. 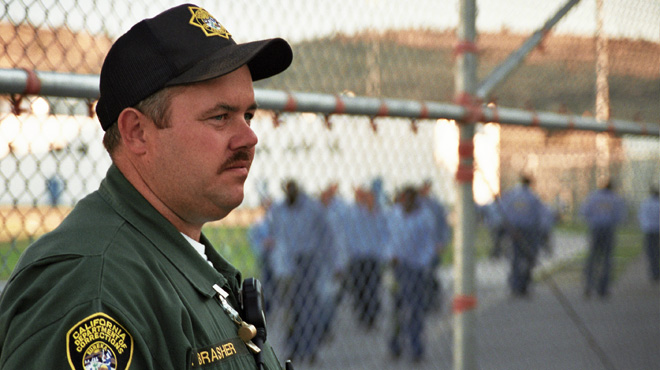 Katie Galloway is a documentary director, producer and writer whose films explore the intersections of institutional power, civil and human rights, and political activism. Galloway, who joined Loteria as co-head in 2009, won the 2012 Writer’s Guild of America’s Best Documentary Screenplay Award for Better This World, which, after premiering at SXSW,… Show more also went on to win Best Documentary at San Francisco International and Sarasota Film Festivals, the Gotham Independent Film Award’s Best Documentary Prize, and an International Documentary Association Creative Recognition Award, among others. It is currently being developed as a narrative feature. Galloway’s feature documentary Prison Town, USA broadcast nationally on POV/PBS and was developed as a fiction television series by IFC, for which Galloway co-wrote the first three episodes. Galloway produced and reported an award-winning trio of films on the American criminal justice system for PBS FRONTLINE: Snitch, Requiem for Frank Lee Smith and The Case for Innocence. A two-time Sundance Fellow and recent HBO/Film Independent Documentary Fellow, Galloway taught documentary production at Columbia University’s Graduate School of Journalism and now teaches Documentary History and Theory at UC Berkeley. In addition to teaching in Media Studies at Berkeley, she was recently made “Filmmaker in Residence” at the Graduate School of Journalism’s Investigative Reporting Program. A Ph.D. in Political Science (UC Berkeley, 2012) with specialties in Political Psychology and Public Law, Galloway’s films in production include a look at the U.S. roots of the Mexican Drug War, an examination of an unprecedented experiment in criminal justice reform unfolding in California with profound national implications, and an investigation of the ongoing battle over who gets to vote in America and why, timed for release at the 50th anniversary of the Voting Rights Act in 2015. Show less

Other ITVS Films
Better This World
The Return

Creatively weaving several diverse stories that unfold over the course of two years in Susanville, California, Prison Town, U.S.A. allows the vivid voices of "lifer" inmates, ranchers, and politicians to reveal the untold story of the impact of America's prison-building boom.