A Robot Walks into a Bar

A new breed of labor robot works at a bar with the mission that may be impossible: to excel at his new job while avoiding human injury. 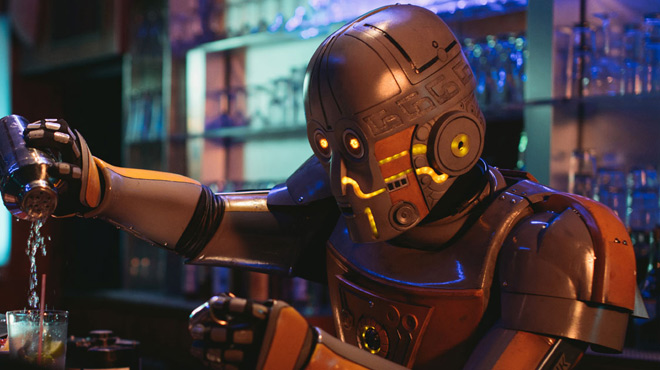 Alex Rivera is a filmmaker who has been telling new, urgent, and visually adventurous Latino stories for more than fifteen years. His first feature film, Sleep Dealer, a science-fiction feature set on the U.S./Mexico border, won multiple awards at the Sundance Film Festival and the Berlin International Film Festival, was screened as part of New… Show more Directors/New Films at the Museum of Modern Art and Lincoln Center, and had a commercial release in the U.S., France, Japan, and around the world. Rivera is a Sundance Fellow, Rockefeller Fellow, USA Artist Fellow, Creative Capital grantee, and was named one of Variety Magazine’s “10 Directors to Watch.” His recent collaborations have included work with Manu Chao, Maria Hinojosa and La Santa Cecilia. Rivera studied at Hampshire College and lives in Los Angeles. Show less

Carlos Garza spent a decade in the film festival world before switching gears to producing. He was a founding member and Programmer of the Morelia International Film Festival in Mexico and World Competition Coordinator for The Sundance Film Festival, while also working in journalism and publicity. He holds a B.A. from the College of Liberal Arts at the… Show more University of Texas at Austin and recently completed an M.F.A. in Producing at the American Film Institute Conservatory. His thesis film Ni-Ni is currently beginning its festival run, having been selected in competition at the Clermont-Ferrand Short Film Festival among others. Show less

A new breed of labor robot works at a bar, his mission is to excel at his new job while avoiding human injury, he soon learns that this may be impossible.