A teenager and a 70 year-old man tackle antigay policies, showing what can happen when people unite with a common purpose. 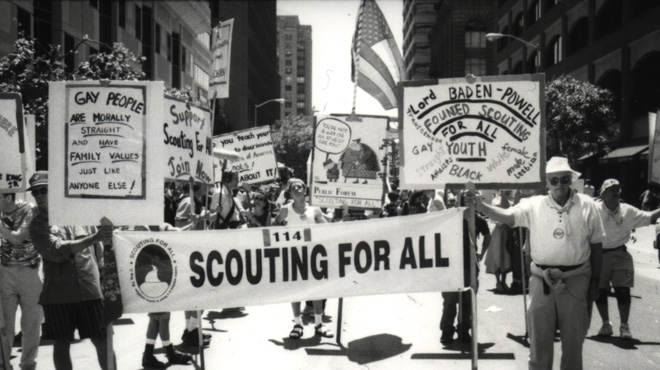 For 20 years, filmmaker Tom Shepard has produced, directed, edited, and distributed documentary films. Four of his feature projects – Scout's Honor, Knocking, Whiz Kids and The Grove– have aired nationally on PBS (including POV, Independent Lens and PBS Plus). Coverage of his work has been featured prominently in the U.S. and foreign press, including… Show more reviews of three of his films in The New York Times, The Los Angeles Times, Washington Post, and Boston Globe among others. Shepard’s films have played in more than 150 film festivals worldwide – including Full Frame, SilverDocs and the Sundance Film Festival (where he won two top awards for Scout's Honor in 2001.) Shepard is the former Chairman of New Day Films and regularly teaches documentary film in California and Colorado. In 2013, he founded the Youth Documentary Academy (www.youthdocumentary.org) which trains high school students from underserved communities how to produce and direct documentary films. He graduated from Stanford University where he studied human biology and film. Show less

"To be physically strong, mentally awake, and morally straight" — this is the Boy Scout pledge. Since 1910, millions of boys have joined. But today, if you are openly gay, you can't. Witness how one remarkable 12-year-old Boy Scout named Steven Cozza launches a grassroots campaign to overturn the Boy Scouts' anti-gay policy. "Scouting for All" is the movement built by Cozza with the help of a longtime Scout leader, community members, and his own parents. Scout's Honor chronicles a modern interpretation of the scouting ideals of courage and honor.