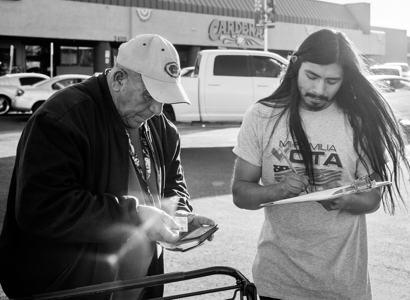 (LOS ANGELES, CA) — Latino Public Broadcasting (LPB) today announced that the new VOCES special, “Latino Vote: Dispatches from the Battleground,” premieres Tuesday, October 6, 2020, 9:00-10:00 p.m. ET (check local listings) on PBS, pbs.org and the PBS Video app. Directed by Bernardo Ruiz (Harvest Season, Reportero) and produced by Ruiz and Andrea Cordoba, “Latino Vote: Dispatches from the Battleground” is an up-to-the-minute look at the ever-evolving 2020 election through the eyes of Latino voters who are poised to be the largest racial or ethnic group eligible to vote in a presidential election.

Historically known as “the sleeping giant,” the Latino vote has been an elusive prize, but many believe that 2020 will be the year the giant awakens. Latino voters turned out at unprecedented rates in the 2018 midterms and candidates have stepped up their courting.

Told through a series of immersive dispatches from the battleground states of Nevada, Texas, Florida and Pennsylvania, “Latino Vote: Dispatches from the Battleground” follows the efforts of grassroots organizers, community leaders and political operatives working to ensure Latino voter turnout. The film follows left-leaning progressives as well as Latino evangelicals, many of whom support President Donald Trump.

The film begins in Las Vegas as candidates reach out to Latino workers ahead of the February caucus and then moves on to Super Tuesday, March 3, when Joe Biden’s candidacy seems assured. But less than two weeks later, the country is struck by an unexpected calamity: a pandemic that ravages communities both rural and urban, with Latinos bearing a disproportionate brunt of the devastation. Soon, the country is roiled again by the May 25 killing of George Floyd. What effect this seismic shift in the national landscape will have on Latino voters in November is a question organizers and candidates are hoping to answer as this very unique election draws near.

“‘Latino Vote’ is a fascinating chronicle of this year’s highly charged political climate,” says Sandie Viquez Pedlow, executive director of Latino Public Broadcasting and executive producer of VOCES. “With Latino voters poised to be a powerful non-white bloc this November, this film introduces us to those on the ground, working to realize this promise.”

Says director/producer Ruiz, “I was eager to bring journalism to the screen that doesn’t rely on correspondents or pundits, but instead focuses directly on the Latinx organizers and voters who may very well determine the nation’s political future.”

“As one of the nation’s most trusted sources for news and public affairs programming, PBS is pleased to air ‘Latino Vote’ and shine a light on the important role this community will play in our upcoming democratic process,” said Perry Simon, PBS Chief Programming Executive and General Manager of General Audience Programming.

About the participants, in order of appearance

Bernardo Ruiz (Director/Producer) is a two-time Emmy® Award-nominated documentary filmmaker and a member of the Academy of Motion Pictures Arts and Sciences. He has directed and produced four feature documentaries and a host of nonfiction programming for a variety of outlets including PBS, HBO, ESPN and Facebook Watch. His feature credits as director include: The Infinite Race (ESPN’s 30 for 30, 2020), Harvest Season (Independent Lens, 2019), Kingdom of Shadows (Participant Media, 2015) and Reportero (POV, 2013). In the fall of 2015, Ruiz was a filmmaker in residence at the Investigative Reporting Program (IRP) at the U.C. Berkeley Graduate School of Journalism. Previously he created and executive produced the two part bilingual PBS series, The Graduates/Los Graduados (Independent Lens, 2013). Edutopia called it “a winner that should be seen by as many students, teachers and parents as possible.”

PBS, with more than 330 member stations, offers all Americans the opportunity to explore new ideas and new worlds through television and digital content. Each month, PBS reaches over 126 million people through television and 26 million people online, inviting them to experience the worlds of science, history, nature and public affairs; to hear diverse viewpoints; and to take front row seats to world-class drama and performances. PBS’ broad array of programs has been consistently honored by the industry’s most coveted award competitions. Teachers of children from pre-K through 12th grade turn to PBS for digital content and services that help bring classroom lessons to life. Decades of research confirms that PBS’ premier children’s media service, PBS KIDS, helps children build critical literacy, math and social-emotional skills, enabling them to find success in school and life. Delivered through member stations, PBS KIDS offers high-quality educational content on TV – including a 24/7 channel, online at pbskids.org, via an array of mobile apps and in communities across America. More information about PBS is available at www.pbs.org, one of the leading dot-org websites on the internet, or by following PBS on Twitter, Facebook or through our apps for mobile and connected devices. Specific program information and updates for press are available at pbs.org/pressroom or by following PBS Pressroom on Twitter.

Produced by Latino Public Broadcasting, the acclaimed PBS documentary series VOCES features the best of Latino arts, culture and history and shines a light on current issues that impact Latino Americans. Devoted to exploring the rich diversity of the Latino experience, VOCES presents new and established filmmakers and brings their powerful and illuminating stories to a national audience — on TV, online and on the PBS app. VOCES is supported in part by the National Endowment for the Arts. Luis Ortiz is series producer; Sandie Viquez Pedlow is executive producer. Follow us on Facebook  and Twitter.

Latino Public Broadcasting (LPB) is the leader in the development, production, acquisition and distribution of non-commercial educational and cultural media that is representative of Latino people, or addresses issues of particular interest to Latino Americans. These programs are produced for dissemination to public broadcasting stations and other public telecommunication entities. Latino Public Broadcasting provides a voice to the diverse Latino community throughout the United States and is funded by the Corporation for Public Broadcasting. Latino Public Broadcasting produces VOCES, the signature Latino arts and culture documentary series on PBS devoted to exploring the rich diversity of the Latino experience. Between 2009 and 2019, LPB programs won over 125 awards, including two prestigious George Foster Peabody Awards as well as Emmys, Imagen Awards and the Sundance Film Festival Award for Best Director, Documentary. In addition, LPB has been the recipient of the Norman Lear Legacy Award and the NCLR Alma Award for Special Achievement – Year in Documentaries. Sandie Viquez Pedlow is executive director of LPB; Edward James Olmos is co-founder and chairman.

ITVS is a San Francisco-based nonprofit organization that has, for over 25 years, funded and partnered with a diverse range of documentary filmmakers to produce and distribute untold stories. ITVS incubates and co-produces these award-winning films and then airs them for free on PBS via their weekly series, Independent Lens, as well as on other PBS series and through their digital platform, OVEE. ITVS is funded by the Corporation for Public Broadcasting. For more information, visit itvs.org.

Latino Vote: Dispatches from the Battleground