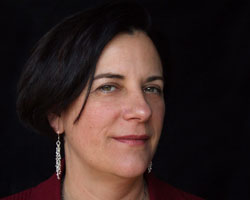 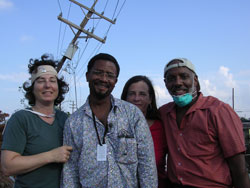 Nestled at the edge of New Orleans' fabled French Quarter, Faubourg Tremé is one of America's oldest African American neighborhoods. This once vibrant neighborhood was the birthplace of the Civil Rights movement in the South and the home of jazz. Shot largely before Hurricane Katrina, FAUBOURG TREMÉ: The Untold Story of Black New Orleans pays tribute to what African American communities have contributed––even under the most hostile of conditions. Throughout the month of February, it will air on PBS (check local listings). Filmmaker Dawn Logsdon recently sat down to discuss the film and why she approached ITVS for funding. Read the Q&A below:

What inspired you to make a film about Faubourg Tremé? It’s an amazing place with an amazing history that almost no one knew––even in New Orleans. I had a personal connection to the area because my father was a local historian who had dedicated his life to uncovering this forgotten history and used to drag me along as a kid to talk with the old people in French and translate old tombs. My co-director/writer Lolis Eric Elie had a more recent personal connection in that he’d moved to the neighborhood a few years before and was renovating an old house there. I think we picked the Tremé neighborhood because in many ways it epitomized the best and the worst of New Orleans for us. On the one hand, for centuries, it’s been a wellspring of incredible multiracial creativity and cultural exchange. On the other hand, that same history is littered with tragic failures and brutal oppression and the contemporary neighborhood was reeling from the effects of that history.

What were some of the challenges of making this film? 1. What I wanted to capture were the many ways past and present come together. That’s incredibly hard to do for an entire neighborhood because it meant bringing together over 200 years of very complex history, complex themes and an array of historical and contemporary characters. We struggled with how to do that for a long time and finally in the summer of 2005 we had a cut we were pretty happy with. Then the levees broke and flooded 80% of our city, including my own neighborhood and parts of Faubourg Tremé. That year was definitely our low point. We had to relocate, rebuild our own lives, and at the same time re-conceive an already complicated film to include a one more huge, unanticipated storyline. 2. Fundraising- especially before Katrina when most major funders would tell us “ it wasn’t a national story.” 3. Feeding a vegetarian cameraman in the middle of a disaster zone.

How did your background shape the making of this film? I’m white and Lolis is black. As children of the 60’s, we belong to the first “desegregation generation” in the South. Both of us grew up in families that were very active in the Civil Rights movement and the movement permeated our childhoods. I was sent to an almost all black elementary school and Lolis and his sister were the first black children to attend a fancy all-white private school. Lucie Faulknor, our co-producer, was a recent transplant to New Orleans from San Francisco and brought her newcomer’s eyes to the story. So of course our backgrounds influenced what we thought was important about Faubourg Tremé. In my memory of the last several years, we were almost always in agreement about the Civil Rights focus of the film and instead we argued constantly about the way to tell that story. I’m more drawn to characters and human emotion. Lolis is more drawn to facts, especially facts told as succiently as possible by experts. I don’t know if that’s the difference between my training as a filmmaker and his as a print journalist or just some fundamental difference in the way we interpret the world. I do know that Lucie was frequently the mediator and also the one who continually pointed out things that we as New Orleanians took for granted but that a national audience wasn’t going to understand. The result of all those arguments I think is a strong film that blends all of our outlooks and created a lifelong bond among us.

Why did you work with ITVS to fund your film? How did you first hear about us? I had edited several ITVS funded films including the WEATHER UNDERGROUND and HOPE ALONG THE WIND: The Life of Harry Hay, so I already knew about ITVS and more specifically about the LINCS initiative. LINCs seemed like a perfect fit for us because it pairs projects with a regional focus with local PBS stations. We ended up with two partner stations––first, WYES in New Orleans, and then after Hurricane Katrina, LPB in Baton Rouge came to our rescue. Check out a preview of the film below: