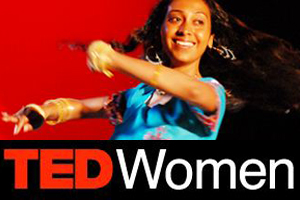 ITVS Vice President and Independent Lens Series Producer Lois Vossen reports on the second and final day of the TEDWomen conference in Washington, D.C. The event explores how women and girls are reshaping the future. Day Two of TEDWomen had a decidedly different feel, as if to say, “We’re getting down to business today.” The morning opened with Deborah Rhodes, director of the Mayo Clinic’s Executive Health Program. She spoke about research she has conducted with a gamma camera that can see tumors missed in traditional mammography for women with dense breast tissue. 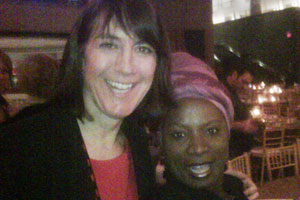 Heather Knight of Marilyn Monrobot Labs introduced her socially intelligent robot and reminded us that to work with robots we need to find ways to socialize with them. Knight asked us to judge her robot as she told us a series of jokes and reminded us to be honest and “Not to worry, her robot doesn’t have feelings – yet.” The intersection with technology continued with a humorous, engaging presentation by Rufus Griscom and Alisa Volkman, web publishers of Babble (a website for new parents) and the founders of nerve.com. An emotional presentation by Aicha El-Wafi and Phyllis Rodriguez, two women deeply affected by the events of September 11, 2001, moved the conference in a new direction, namely the critical role women play in reconciliation and politics. Rodriguez lost her son to the violence of 9/11 and El-Wafi’s son is one of the men accused of causing the devastation of that day. The tragedy brought unbelievable loss for both women, and in the years since, they have forged a deep friendship as they work together to encourage reconciliation and tolerance. 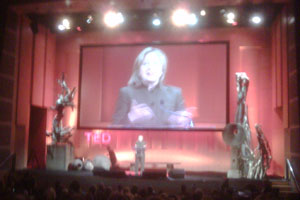 A surprise visit by Secretary of State Hillary Rodham Clinton ended the morning sessions, as we turned our attention to the state of women and girls around the world. In a presentation that afternoon, former Secretary of State Madeline Albright shared her personal mantra: “There’s a special place in hell for women who don’t help women.” Albright also reminded us to celebrate how far we have come. Her 7-year-old granddaughter recently wondered, “What’s the big deal about Grandma Maddie having been the Secretary of State? All Secretaries of State are women,” reminding us that in her short lifetime that revolutionary reversal has occurred.

We traveled via satellite for a presentation by Her Excellency Sheikha al Mayassa of Qatar, a young and progressive force behind her country’s mission to become the Middle East’s foremost destination for arts and culture. The two-day conference ended with the first-ever reception at the new, architecturally stunning U.S. Institute of Peace. Brief remarks by Madeline Albright, a performance by a young women’s choir from the Duke Ellington School of Music, and the dedication of the new Albright Wing at the U.S.I.P. building completed a robust two-day conference that took us from Africa to Doha, from Mexico to Madrid — around the world and back to our own communities to continue our work on behalf of women and girls.

At Independent Lens and ITVS, we will continue to use events like TEDWomen to forge new partnerships and enrich the work we are doing in our new Women’s Empowerment Initiative.