Belly of the Beast, which premiered on Independent Lens in November 2020, exposes illegal sterilizations and reproductive injustices in California prisons. The film follows Kelli Dillon, who was involuntarily sterilized at the age of 24 while incarcerated, as she teams up with human rights lawyer Cynthia Chandler to fight for reproductive justice.

Since the film’s inception, Kelli and Cynthia, along with the film’s director, Erika Cohn, and film producer Angela Tucker, have spearheaded a powerful engagement and impact campaign. The team hosted numerous screenings, engaged in community discussions, and implemented a strategic media campaign. Their goals: to end sterilizations in women’s prisons and to get reparations for survivors.

Their tireless work paid off.

The vast majority of Belly of the Beast viewers, including those that worked within the criminal legal system or toward its reform, were shocked to learn that forced sterilizations were taking place in women’s prisons. Driven to further raise awareness about these atrocities, most viewers planned to discuss what they had learned with their friends, family, or coworkers. Outraged by the revelations in the film, many also shared plans to get involved in prison reform efforts or to contact their elected representatives to bring about change. 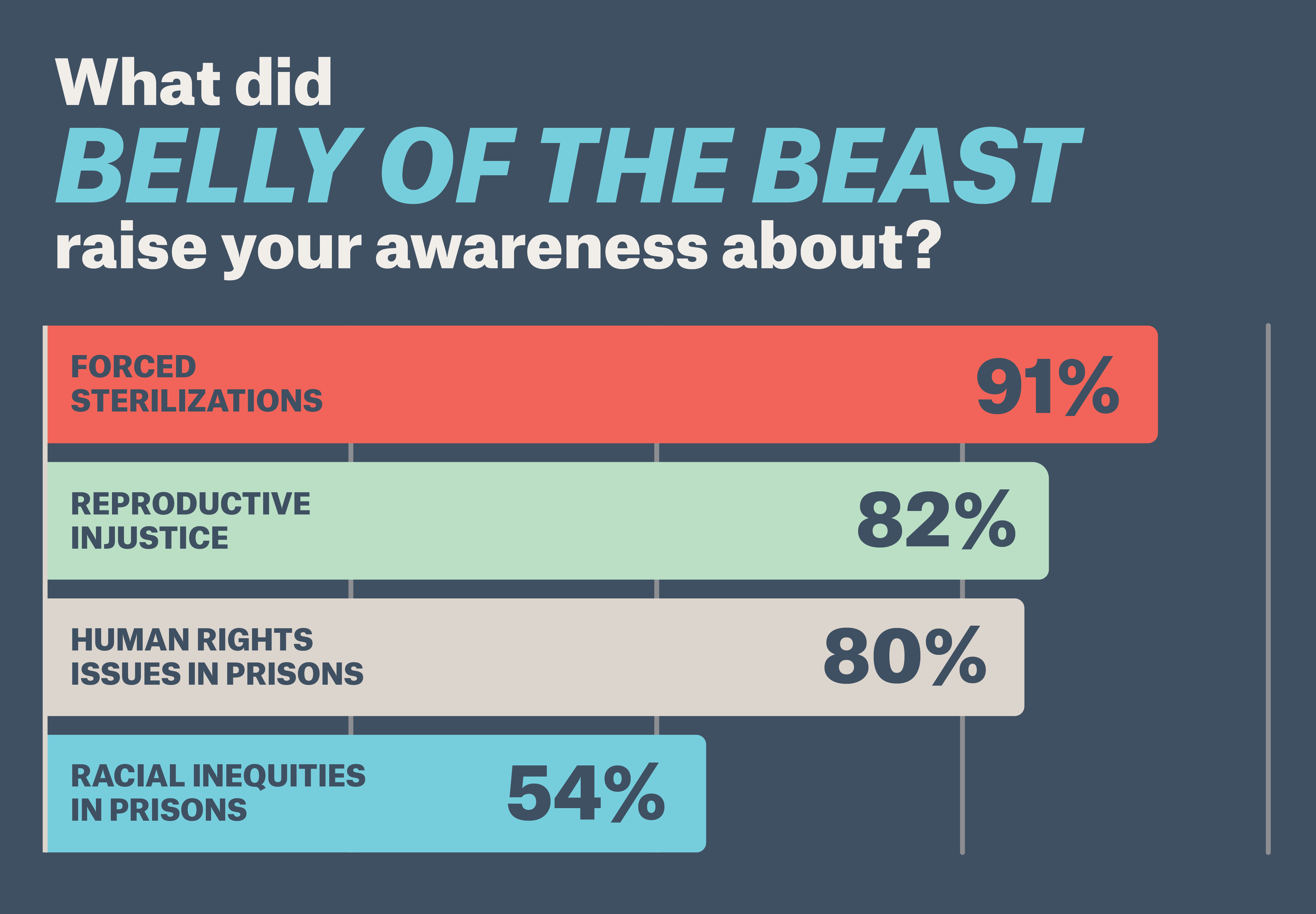 Note: The film team partnered with ITVS to measure the impact of their work. As of July 2021, 432 viewers had shared how Belly of the Beast impacted them via DocSCALE, ITVS’s interactive feedback platform.

What were your impact goals?

ERIKA: This has been a long fight for many years. Over a decade of work on the film, and over two decades of work for Cynthia and Kelli fighting for justice and accountability.

Over 11 years ago when I first started this, the idea was to expose what was going on in California prisons. The goal was to create legislation immediately to end the sterilization abuse, and in the longer term to seek justice for survivors. When we first talked about what justice would look like, reparations came up a lot in conversations with survivors and individuals inside of prisons. It has always been about: How do we get justice? How do we ensure there is accountability?

KELLI: When we started out, I was trying to figure out what happened to me. Cynthia had the compassion and the smarts and know-how to navigate around the prison system and give me the knowledge and information that I needed.

Knowledge is power. When people withhold that, they are able to continue to victimize you and oppress you. Once she gave me the knowledge of what happened to me, I discovered that there might be a pattern of abuse going on.

The film can spread that knowledge.

CYNTHIA: My hopes for the film were two-fold. For one, I wanted people to understand how white supremacy infiltrates all of our institutions. I think we are becoming more accustomed to talking about how white supremacy infiltrates policing, but it also infiltrates the family and renders the reproductive future of communities of color so valueless. I hoped this film would expose that eugenics are really happening. That word has been lost from our modern lexicon.

The second thing I hoped for was that the story would be bigger than us. The story hopefully inspires people to see that no matter who you are, or where you are, or how much power or lack of power you think you have, we all have power to make real, significant change.

It has been such a long journey. How did you start working together on the film?

CYNTHIA: When Erika first approached me to ask if she could film our work, we were at the height of the prison expansion boom in the United States. We were in a tough-on-crime political moment. I was cautious about opening access to people who could twist the footage to do harm rather than good.

I made it clear: If you are going to follow us, you need to actually do the work. I don't think many filmmakers would have taken me up on that offer. Erika stepped in and got trained as a legal advocate and maintained legal correspondence with people in prison and really contributed to the campaign. Because of that, we were willing to open access.

What were some critical components of your engagement and impact campaign?

CYNTHIA: Erika put a lot of work and attention into building an advisory board as part of her filmmaking process. She brought together a coalition composed of organizations working on reproductive justice and racial justice to help guide the film, and how to increase its reach and impact. She demonstrated an incredible level of integrity.

ANGELA: In addition to the advisory board, we have always been working with impact producers, even in the production of the film. Really, it’s an impact team. Change like this doesn't happen with one filmmaker in the house by themselves, trying to make the difference. It requires a team of people doing the work and funding to support it.

It's also important when you roll out the film to get pieces written from different angles. In addition to the Independent Lens team’s work, we also hired a publicist and a social media person. Of course, there is the typical piece that is written about the film, but it is also useful to think about different ways to talk about the issues within your film. We had an all-hands-on-deck approach to getting the message out. We want the film to encourage people to talk about the issues.

I also think our decision to partner with Independent Lens and to choose distribution on public television upfront, even in the fundraising stages, was important. We really wanted to have the film be available to people who are currently incarcerated, and public media provided that opportunity.

Have you heard from people inside prison who saw the documentary?

KELLI: Prisoners from all over the country have reached out to us. The women that I was incarcerated with and I would talk amongst ourselves about how certain procedures went. We didn’t have a full understanding of what happened to us, but we had a feeling that something was wrong. For them to watch this film and to see, my gosh, these are actual things that are happening. I myself may have been coercively sterilized or lied to. It has opened up so much. We’ve even had a lot of men who have come forward and said that they feel that they may have been sterilized as well.

And, it’s not only the people who are incarcerated, but some of the women who are now home are also reaching out to us. They want to find out what happened to them as well.

I believe that was one of the reasons why prior reparations bills before the release of the film died each time. The state didn't want to deal with the notification process or people bringing their voices forward. As long as they were able to suppress that information and sweep the few articles about sterilization under the rug, they were able to silence people.

What was challenging about your engagement and impact campaign?

CYNTHIA: Thinking of documentary as a tool in our work—as someone who has dedicated my life to doing social justice work and for Kelli as a survivor—it was really difficult to watch the film and relive trauma multiple times during screenings. You experience empathy burnout issues and PTSD. It was hard.

And, because of the pandemic, we haven't been able to celebrate with each other. For me and Kelli, it would have been wonderful to have that red carpet experience to mark that success. It's important to sustain yourself emotionally by celebrating victories. The film coming out was a huge victory for us.

ERIKA: The first couple of months after the pandemic hit were incredibly difficult. I was stuck in the traditional framework for a film roll out and had to reimagine everything that we had planned for the virtual space. It was heartbreaking at the beginning. As we started to tackle it as a full team with Kelli and Cynthia, it ended up to be incredibly freeing to let go of those traditional distribution rollout plans and reimagine how increased accessibility to the film could benefit the film in the long run.

Also, during the pandemic, we weren't experiencing audience reactions in real time. It's been challenging to not understand who's in the room and how they are feeling. DocSCALE (ITVS’s interactive feedback tool) is an incredible tool and was an opportunity to do so. In particular, for the medical and legal communities, it helped us understand how the film can be used within their practice, and to hear about their direct experiences with either forced sterilization or issues related to human rights abuses. The results are profound.

What else did you learn from the DocSCALE survey?

ANGELA: I am based in New Orleans, and I participated in an incredible online screening that was with local Louisiana organizations. Individuals responded to the survey and raised issues that were locally important. This was early in our engagement campaign, and it gave us insight into how we could use the film as a tool to bring attention to issues happening everywhere. Hearing that early feedback was really helpful.

How did you connect to current issues?

KELLI: After COVID-19 hit, we had this civil unrest, racial reckoning, and protest. I told Erika: This is the perfect time to release Belly of the Beast. We need to release this now while this is happening. Everybody was shouting about what was wrong with this country and the film could be confirmation about what we were fighting for.

It really blew up. Cynthia and I were able to be in virtual screening spaces in New York, Florida, Chicago, Oakland all in one day. Because our country was ready to come together, we were able to utilize the film and that moment to bring social justice organizations into our work. We could use the film as a catalyst.