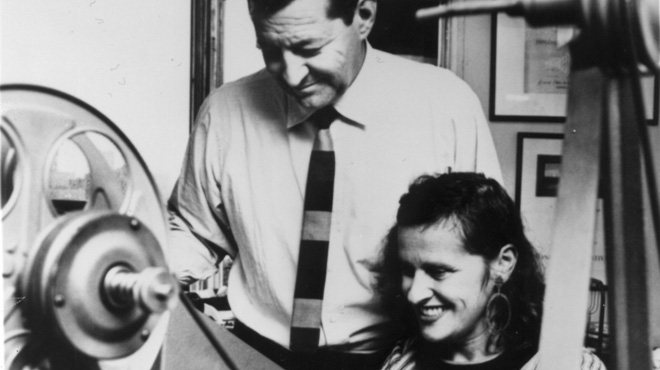 Sybil DelGaudio's interest in animation extends beyond her career as a filmmaker. An associate professor in the communication arts department at New York's Hofstra University, she teaches film studies and production. In addition, she has written many articles for film journals and anthologies, among them Jump Cut, Columbia Pictures: Portrait of a Studio,… Show more and The American Animated Cartoon. Her recent book, Dressing the Part: Sternberg, Dietrich and Costume was published by Associated University Presses. Dr. DelGaudio is also a member of the Society for Animation Studies. She has presented a series on independent film and filmmakers at the 92nd Street Y in New York. Show less

In addition to her work as an independent filmmaker, Patty Wineapple is a vice-president at Grey Advertising in New York. She has produced more than 400 television commercials, receiving numerous awards for her work on campaigns for such clients as the Borden Company, Parker Brothers, and Stride-Rite. In 1977 she produced the one-hour television… Show more special Broadway, My Street!, co-starring Jerry Orbach and Florence Henderson. And in 1980 she co-produced SPFX-1140, a short film directed by Bob Balaban. Show less

With their unique blend of intelligence, humor, and social commentary, Hubley films were made by animation artists whose ultimate goal was not to have the mouse escape the cat, but “to increase awareness, to warn, to humanize, to elevate vision, to suggest goals, to deepen our understanding of ourselves and our relationship to one another.” Their non-traditional techniques — a blend of watercolor, wax crayons, multiple exposures, and lighting from beneath the camera — give the films a spontaneity, and emphasize the free-form graphic approach that has characterized the Hubley style.

Independent Spirits is also about the passion, spirit, and commitment of independent artists attempting to exist in a culture of compromise. The Hubleys’ professional choices, even before their partnership began, reflected an intense commitment to political alternatives and a belief in social justice. This film looks at what each of them brought to their unique collaboration: John, an artistic brilliance nurtured at the Disney Studio; Faith, a deep respect for cultural diversity and a rebellious spirit formed in a tough New York City neighborhood. Both were committed to the belief that animation could deal with serious subjects and make a difference in the world.

Faith and John have left their mark on television advertising, children’s television and feature films — but always, they returned to what they had promised each other in their marriage vows, “to make at least one independent film a year,” a promise that Faith Hubley maintained after her husband’s death in 1977 until her own passing in 2001.