Garrison Keillor: The Man on the Radio in the Red Shoes

Not since Will Rogers and Mark Twain has America had the good fortune to have someone look at us in such a witty manner as Garrison Keillor. 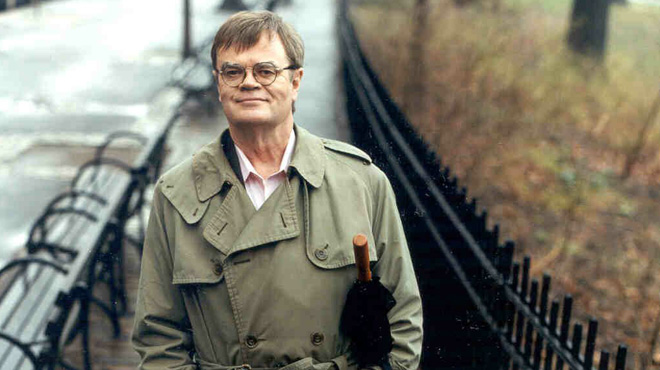 Peter Rosen has produced and directed more than 100 full-length films and television programs that have been distributed worldwide and have won awards at major film festivals. He has directed important figures in the arts such as Leonard Bernstein, Yo-Yo Ma, Beverly Sills, Stephen Sondheim, Midori, Martha Graham, Placido Domingo, Luciano Pavarotti,… Show more Van Cliburn, Claudio Arrau, I. M. Pei, and Garrison Keillor. He has won the DGA Award, a Peabody, and an Emmy. Show less

No one else has a take on America that is as incisive as Garrison Keillor. Not since Will Rogers and Mark Twain has America had the good fortune to have someone look at us in such a witty manner. This film trails Garrison Keillor as America’s foremost humorist, as he takes us on a personal tour of the country and people he knows so well.

Garrison Keillor, America’s raconteur, is a prolific author with more than 20 books to his credit, a highly sought speaker and lecturer, and is credited with reviving the virtually lost art of live radio entertainment in America. His weekly radio show, “Prairie Home Companion,” started in 1969, has more than 4 million listeners, is broadcast on 558 stations including America One and the Armed Forces Network.