Women workers in Tijuana’s assembly factories work to carve out lives of agency in a new and complicated century. 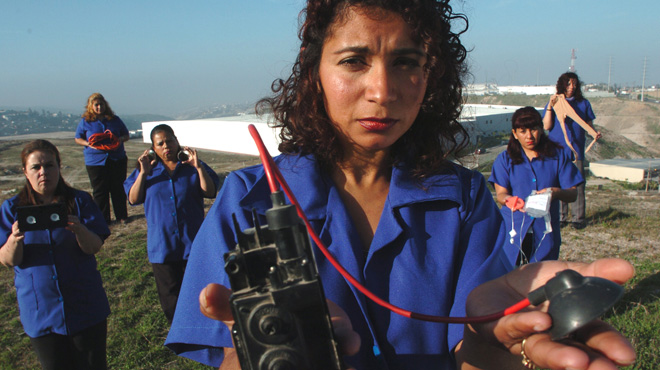 Vicky Funari’s filmmaking focuses on the lives of working people and on the complex identities of today’s culturally mixed and dynamic migratory populations. Funari produced, directed and edited the acclaimed nonfiction feature film Paulina, which has screened in more than 30 of the world’s most prestigious film festivals and won numerous awards. Paulina… Show more aired on the Sundance Channel in 2000. Funari also co-directed and edited Live Nude Girls Unite!, an account of the first successful strippers’ union in the country, which premiered at the 2000 South by Southwest (SXSW) Film Festival and aired on Cinemax in 2001. Her other credits include skin.es.the.si.a, an award-winning experimental short. Funari, who lives in Vallejo, California, served on the board of directors of the Latino media arts organization Cine Accion from 1996 to 2000. Show less

Sergio De La Torre is a photographer and a performance and installation artist who grew up in the Tijuana/San Diego border area. His works have focused on issues regarding diaspora, tourism, and identity politics. In 1995, De La Torre co-founded the performance/installation group Los Tricksters. He has also produced collaborative works with artist and… Show more writer Coco Fusco for a variety of venues including street fairs, academic conferences, art galleries, and film festivals. De La Torre’s works, including Access Denied, Disappearing, and Mexiclone, have appeared in the Bienal Barro de America at the Museo de Bellas Artes in Caracas, Venezuela; in the Cleveland Performance Art Festival; at the El Tapango Centro Cultural in Mexico City; and in San Francisco at the DeYoung Museum and the Yerba Buena Center for the Arts. His film and video work has included photography for the film La Raza, directed by Adolfo Dávila, and serving as the assistant to the art director on Garden of Eden, directed by Maria Novaro. He lives in Oakland, California. Show less

Women workers in Tijuana's assembly factories tell their stories, revealing the transformation of a city and its people by globalization. Factory worker Carmen Durán and her colleagues describe environmental devastation, infrastructural chaos, and violations of human and labor rights as they work to transform their world and carve out lives of agency in a new and complicated century.