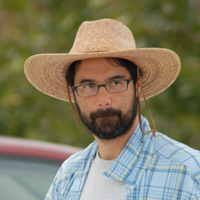 Greg Pak is a filmmaker and comic book writer best known for directing the award-winning feature film Robot Stories and writing acclaimed storylines such as “Planet Hulk,” “World War Hulk,” and “Magneto Testament” for Marvel Comics. Pak was named one of 25 Filmmakers to Watch by Filmmaker Magazine; described as “a talent with a future” by The New York Times;… Show more and named Breakout Talent of the Year by Wizard Magazine. His awards include a Student Academy Award, the Pipedream Screenwriting Award from the IFP Market, and a Rockefeller Media Arts Fellowship. Pak studied political science at Yale University, history at Oxford University as a Rhodes Scholar, and film production at the NYU graduate film program. Show less

In the disturbingly near future, Venice is submerged, Canal Street in New York City has become a real canal again, and it’s 87 degrees in December in Boston. Catastrophic global warming has moved from theory to fact. At the Biosphere Climate Change Expo, undersecretary for the Department of Global Warming Mason Park (Tim Kang) informs the crowd of scientists and activists that the tipping point has passed, and that they are all at fault.

He tells them that the scientists of the world failed to create the necessary pressure, which would have allowed for the political changes needed to confront global warming. Now the Department of Global Warming has been defunded, drying up research money for climate initiatives.

That night at the hotel bar, Park runs into Dr. Gloria Holtzer (Betty Gilpin), a former graduate school classmate, and one of the scientists who will be losing her grant money. Park blames himself for failing to prevent the climate catastrophe in time, but finds comfort in Holtzer’s arms. However, she has an ulterior motive. Park awakens in the morning and soon realizes that everything has changed.

Holtzer's ecotech company has developed an entirely new way to confront the challenge of catastrophic global warming — by changing the very nature of the human race itself. And Park has become a very powerful test subject.

Mister Green is a parable about change — both personal and political.