The story of the miscommunication between two cultures and their different perceptions of justice takes place in Uganda and at The Hague.

Klaartje Quirijns grew up in the Netherlands and has worked as a director and producer. Her first film was about life in a maximum-security prison in Rotterdam. Quirijns moved to New York City in 1999. Her film The Brooklyn Connection was shown on P.O.V. and discussed on 60 Minutes. She produced The Dictator Hunter in 2007 with Pieter Van Huystee, and it… Show more premiered at The Toronto Film Festival. She is currently living in London and working on two new films: one about photographer and filmmaker Anton Corbijn, and On the Couch, a film about therapy in New York. Show less

Other ITVS Films
The Dictator Hunter 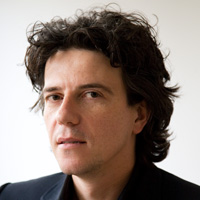 Other ITVS Films
Poor Us: An Animated History of Poverty

For almost 20 years, the government of President Museveni in Uganda has been battling the Lord's Resistance Army (LRA) insurgency in the northern part of the country. The conflict has been described as one of the worst humanitarian crises in the world. Having failed to end the conflict militarily, the government of Uganda invited the International Criminal Court (ICC) to investigate the activities of the LRA with the intention to prosecute the rebel leaders, who are responsible for the most egregious human-rights abuses (kidnapping children and forcing them to fight) that have been perpetrated in the conflict. The ICC investigation has resulted in the indictment of the LRA's five most senior leaders. However, they have yet to be apprehended.

Nobody — least of whom the millions of people of northern Uganda who have been displaced from their homes, whose children have been abducted, drugged, and forced to kill — would argue that that LRA is not a vicious rebel movement.

However, when the ICC, at the invitation of the Ugandan government, issued arrest warrants for the LRA leadership, the rebels were engaged in peace talks. Once they were indicted, Kony, the leader of the LRA lost his incentive to make peace because he knew that any peace deal would result in the LRA's leadership being shipped off to The Hague.

As a result, the LRA has retrenched and continued its bloody war, establishing bases in the neighboring Democratic Republic of Congo, and most recently in Chad, where it continues to abduct children, commit atrocities, and displace more people. Many of the LRA's victims — hundreds of thousands of whom are living in squalid camps miles from their ancestral villages, bereft of livelihoods and completely dependent on humanitarian aid to survive — want the ICC to go away so that peace talks can take place in earnest.

But most lawyers of the ICC, educated in some of the best law schools in the world, are determined: the government of Uganda asked for prosecution by the ICC; their aim is therefore to bring the perpetrators before the ICC. The Africans, however, argue: "Why would the ICC indict our people? Why don't they prosecute the West's own leaders, like Donald Rumsfeld? Is it not time to go after the Western leaders who have abused human rights as well?" The people in Northern Uganda believe in restorative justice, which is based on finding the truth and restoring relationships, instead of the Western justice the ICC is representing, which is based on punishment.